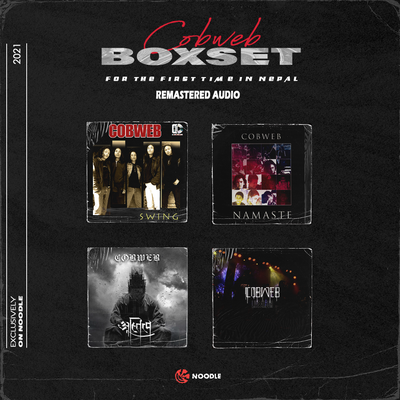 1. Swing (2004)
In their sixth album, Swing, Cobweb keep it simple, classy, and original. Much like the veteran band themselves, the 2004 album is a culmination of the Nepali pop-rock of the early 2000s era. In 2021, the album is refreshing and fun, and an instant mood-lifter. The album begins with "Chaha Chhaina" and its funky drums and electric guitar immediately introduce Cobweb's disitinct rock and roll, a revolutionary sound to Nepali 90s music. The tune sings of the harsh realities of the world, and the futility of wishing for a lot from life, but soft vocals makes it an easy-going rock song. Next up is perhaps one of Cobweb's most loved songs, "Timro Maya", a classic tune that most of us have memorised the words to. The amazingly simple and catchy chorus is difficult to not hum along to, and with slow guitar solos, the song is as iconic and chill as it could be. The distinctive characteristic of this album is the addictive ambience it creates: easy-going, laid-back, steady, and groovy. And in the sweet melodies of "K Hau Timi" and the dramatically dreamy "Hidchhau Sadhai", the album transitions from a theme of love and musing, to one of existence and suffering. "Hidchhau Sadhai" and "Pheri" are distinct for their wondrous themes, in which they ponder the uncertainty and persistence of life, and the songs are quiet encouragement of perseverance and hope. Next up, the album offers an absolute treat to the audience with an alternative version of their evergreen "Maryo Ni Maryo". And finally, "Nakali" brings an end to the collection with an interesting infusion of the harmonica and a set of fun, gentle words. Listening to Swing now is like discovering a time capsule, and with it, realizing that nothing about the songs is old or rusty, a testament to the timeless creations from Cobweb.

2. Namaste (2010)
The release of Cobweb's seventh album in 2010 after a six-year long wait was much anticipated, and with a lineup of fresh tunes and the same old charisma, Namaste did not disappoint. The album ventures into new genres, reminisces on old hits, and its feel-good rock sound has made it massively popular among the Nepali audience to this day. "Mero Lagi '' starts off the album with soulful guitar strummings and soft-rock drum beats while the harmonious melodies are pleasant and catchy; all in all, a perfect balance for a love song for enthusiasts of pop and classic rock. Next up is the title track, a definite stand-out from the album and possibly from Cobweb's discography for its explorative approach to genre. The band's unexpected turn towards reggae seamlessly goes together with their usual style, and the song's laid-back sound with easy-going words and a theme of life and hope meant that it would emerge as one of the crowd favourites. In contrast, "Kehi Sabda Le '' takes on a heavier tone. With an angst to the vocal performance, the song sings of darker themes of love and heartbreak, aptly complemented with a transition to inspirations of heavy rock and metal in production. "Putali '', on the other hand, takes the album to a stand-still. In the minimal, stripped-down track, the band builds an intimate ambience, putting on display the rawness and genuinity in vocal performance and songwriting and production. The track transitions into the initially acoustic "Eklo Jeevan'', which ultimately breaks out into an emotional and dramatic rock anthem that is built around the theme of heartbreak. The final two tracks are definitely a treat to any music lover: rerecords of "Maryo ni Maryo '' and "Mercedes Benz". With recent production techniques, the songs are surely of higher quality and cleaner in production, but they are also a testament to just how much technology in music has improved since their early "Maryo ni Maryo '' days. One of their most diverse albums in terms of the sound, Namaste is also dynamic, iconic, and an overall pleasant listening experience. A timely reminder of the reason why Cobweb get the appraisal they deserve.

3. Astitwa (2016)
Pioneers of rock in Nepali music - Cobweb's legacy remains unmatched even after almost three whole decades, and their eighth album, "Astitwa" is proof of their persistent, unequivocal presence along with a will to progress and grow. After years of traversing through genres and working with ever-evolving styles from rock & roll, classic rock, reggae, to soft ballads and more, the band's 2016 album is a definitive arc in the change of their musical style towards heavier and proggier elements - for the better. A three-minute instrumental - steady, heavy, and energetic - warms up the audience for the band's change in direction from their usual classic rock & roll to a heavier tone, in terms of both music and matter. The change is welcome though, because with a set of hard drum beats, heated guitar riffs, and aggressive vocal performance, Cobweb has retained their authentic self which keeps them distinct and unstoppable. As seen in the second track on the album entitled "Samaj'' that introduces the theme of social commentary, which persists throughout. This is the first studio album after Sanjay Aryal joined on vocal duties as well in the band and that has added a powerful dynamic to the band's compositions. The vocal performance sways from that of classic rock & roll to angsty belting while the song expresses an individual's desire to break free from a repressive society, reflected in a gradual build-up of pace. Next up, the title-track begins on a more soulful note, only to break out into a full-on rock anthem; "malai jiuna deu, malai hasna deu" - the words are gut wrenchingly genuine and difficult not to relate to. The seamless transition from "Astitva" to "Pratibimba'' makes way for a self-reflective song that questions one's existence, conscious or unconscious, real or metaphorical, and the words are obscure enough to keep you pondering. One of the most beautiful songs ever about introspect and prospect. With the similarly themed "Rukh'', the album establishes that its poetic expression of existential themes and the fiery execution of sophisticated arrangements, is anything but generic or easy. Definitely a highlight of this album. Then comes a familiar but completely new territory - reverse swells - soothing vocal harmonies and a rock ballad at its core - "Timro Nau'' definitely stands out from the rest of the album for its melodious hook and soft presence. The song is an earnest attempt at making sense of memories and nostalgia, and it builds into the angsty and aggressive "Rajneeti"- back to heavy rock and metal. A live anthem already at all of their gigs. The final track on the album is "K Tero K Mero", a fast-paced metal, rock anthem you'd want to shout along to. A jab at our blissful ignorance and false pretense, the song is a satisfying ending to an album that is reflective of the society and the self. Undeniably, nobody does rock like the iconic and evergreen Cobweb, and "Astitva" is a must-listen game changer from their brilliant career.

4. Live Album (2021)
"Mero Laagi” starts this official live off with this evergreen classic from their Namaste album. This live rendition somehow sounds more lively with the vocal harmonies and the band is tight as always – a reputation they’ve made for themselves. The second track “Hodbazi” was one of the first melancholic tune by the band dealing with themes of addiction and existential crisis. A timeless melody that pulls on your heart strings this one - that needed a revival in the form of audio quality and recording – and the band provided just that in this live session. “Pratibimba” was one of the freshest sounding tracks from the sharp curve that “Astitwa” is. With more of Sanjay Aryal on the vocals, the song already has a crisp mix on the studio album but somehow sounds more potent in this performance with switched harmonies and dynamics and a raw feel. “Samaj” follows next with some interesting time signatures and is a thumper but the live effect selections and switches and the echo in the speech part of the song makes this a different monster on this version. Every instrument sounds crisp and clear – definitely a highlight. “Timro Maya” then shows you why live performances are more lively always with this rendition. A timeless classic made more beautiful with fresher layers and arrangements. We needn’t say more. From Astitwa again - “Timro Nau” follows suit and can be dubbed as Timro Maya – Part 2 in the sense that this song will leave the same legendary trail as the former. The reverse delay and the whole ambience of the song is alive in this version. “Maryo ni Maryo” is the second last track and from seeing their iconic screenings on Image channel to the sound and growth up till this version – extended solos – updated sections and a kickass performance – everything that you can expect from this band. Truly commendable!! And then - “Mercedes Benz” closes this album and what do we say about this one. The band plus a whole ensemble of horns and side vocals and strings section – the already legendary track sounds fresh – updated and grand as it should. This is an essential album for all Cobweb fans as well as those new to the band. This is also the first official live compilation album ever to be released on Noodle or maybe Nepal itself? Crisp mixing and punchy performances – this is great to capture the live spirit of this band. 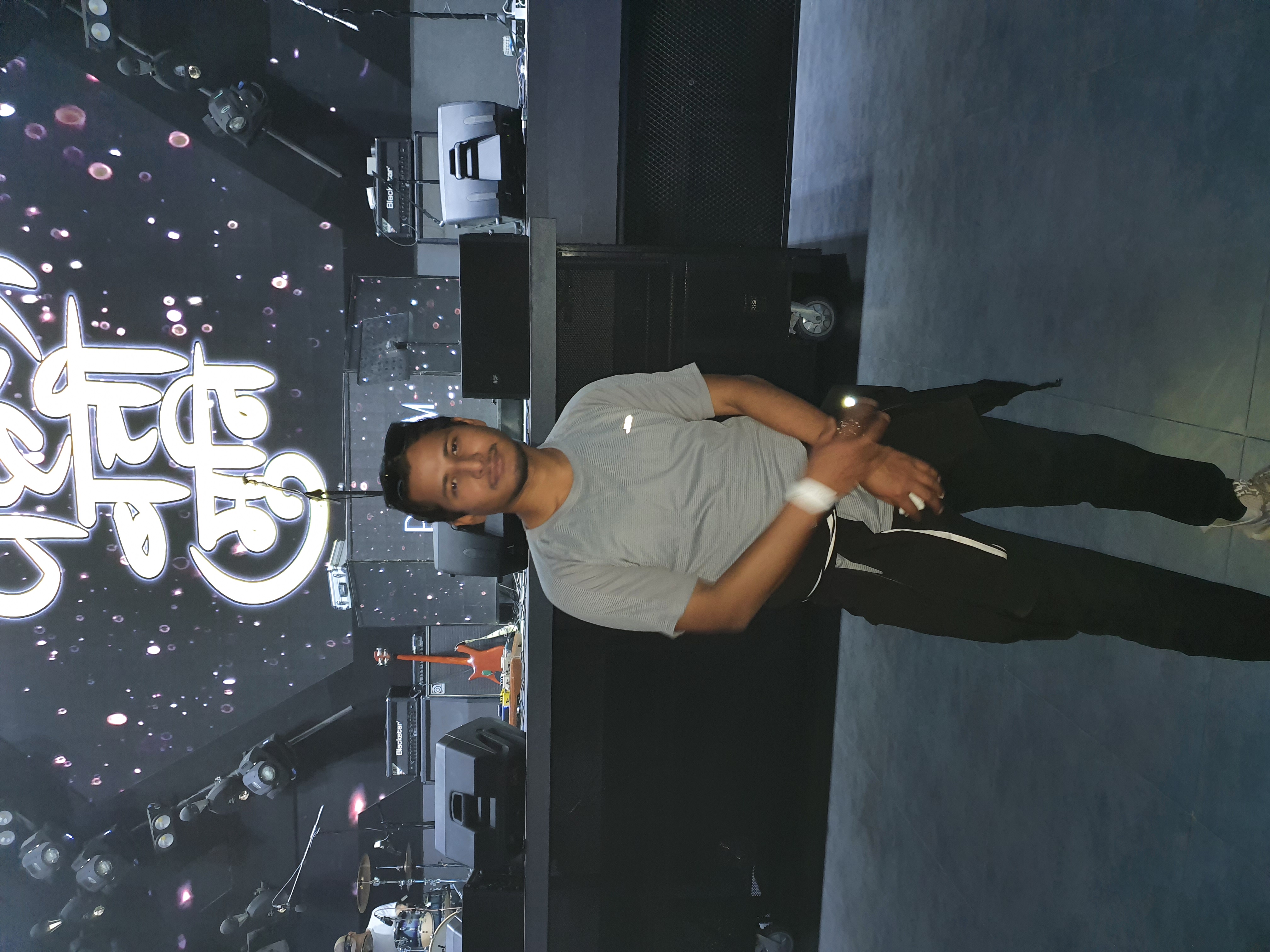